Claude is PSA's Field Officer. He dedicates his time to the people of Bwiza. He is a soccer star and is using his talents to form a soccer team with the children of the village. We took time out and with the help of Dr. Susan threw a big birthday party for Claude.
at 8:01 AM 1 comment:

Check out our first day back in Rwanda. We participated in a village counsel meeting. Listen... 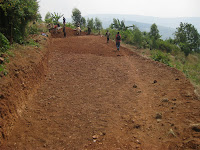 The people of Bwiza have decided to use a recent donation from the US Embassy in Kigali to build terraces to improve their agricultural output. The village of Bwiza is located on steep and rocky hillsides, but the residents are able to cultivate a number of nourishing crops by digging a series of level fields in the hillside. There are 40 new terraces, so each family will own two.
Additionally, a veterinary officer was recruited to follow up with the animals in Bwiza. The officer will visit the village three times a week.

Basket weaving in Bwiza starts up 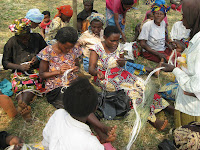 Thirty-two people in Bwiza are learning to weave traditional Rwandan baskets, as part of paid training provided by UN Women. COPHAD’s representatives on the ground are helping coordinate the project, which will provide the villagers with training five days a week for six months on how to weave a high quality product. 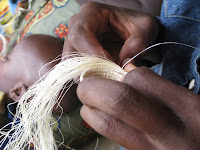 The goal is to generate income. Morale is high!

Bwiza's performance group has just released a new CD of traditional songs about peace, unity and hope. This is unique music that you can't hear anywhere else!

With a donation of $35 or more, you can have your very own copy of the CD.

(Please write “Kwizera CD” in the “Special instructions” section when you make your donation.)

Thank you very much for your support!

In 2008, Pygmy Survival Alliance began working in the village Bwiza, Rwanda, with a population of about 150 people. At that time, the village was physically close to the capital, Kigali, but the living conditions were dramatically worse. Bwiza residents lived in stick houses and went without eating on a daily basis because of lack of food. Their children were slowly dying of malnutrition, and the adults had almost no hope for the future.

The Community of Potters Health and Development (COPHAD) project started because the leaders of the Community of Potters in Rwanda (Batwa Pygmies) asked us to help them stop the decline in their population. COPHAD empowers people to solve their own problems using their own resources. With the people, we develop a plan that they can do themselves, together with our help.

COPHAD applies broad methods to a specific, critical focus: to find and address the root causes of poverty and illness and reverse them. We have focused on inexpensive interventions with a big impact -- our first project being the distribution of cheap, blue plastic shoes to everyone. Even now, we are sometimes known in Bwiza as the people who "taught the pygmies to wear shoes".

We had no clue that those shoes would not only help children to attend school and women to work in the market; but also, to help women gain equality, and to reverse the longstanding cultural prejudice historically maintained by Bwiza's neighbors against the villagers.

COPHAD saves lives, improves the welfare of the poorest people in one of the poorest countries of the world, and is both affordable and sustainable. After three years in Bwiza, we are on the verge of establishing food security -- and that comes after we have already achieved universal health insurance, 100% primary school enrollment, total restoration of traditional dance and performance traditions, rising standards of living and remarkably, even gender equality. Sixty new brick house are now being built in a collaborative partnership with the government of Rwanda and Bwiza's surrounding neighbors. And, the people of Bwiza have become the only certified agricultural cooperative in Rwanda based in a former Batwa community. They are first pygmies to ever own cows.

Welcome to our blog!

Murakaza Neza!
This is the blog of the Pygmy Survival Alliance, where we will post updates about our work in Rwanda.